A weed had sprung up in a flower pot on a roof deck we once had. I watched it for a few weeks. It grew straight up and put out a few leaves. I wondered how high it would go and what would happen at the top. It required nothing from me. When it was tall enough to cast them wide, it grew a single flower and let the wind shake its seeds out. I liked that weed.

The image of weed-1 in Gary William Flake's The Computational Beauty of Nature reminded me of it. 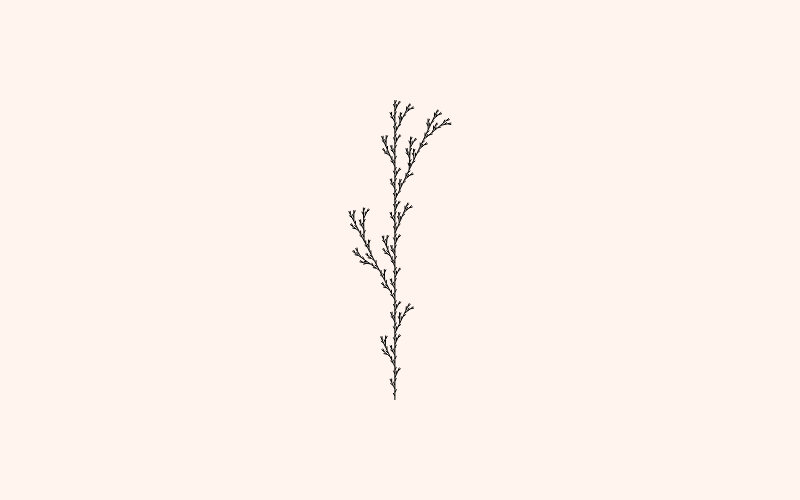 I had been introduced to l-systems briefly by R. Luke Dubois in a computational music course and reading through Flake's description and list of rules, I thought: here is something fun I can make in less than an hour. I thought, the application of rules is straight forward (this was mostly true) and <Canvas/> element's 2D api is perfect for turtle graphics. I can use translate to move around, rotate to handle the turns and scale to make the image fit the canvas. I decided to use just the Flake text as a spec and got started. Of course, there were a few things that made it take a little longer.

L-Systems were invented by a botanist named Lindenmeyer to model plant growth. You start with an axiom and a set of rules and you apply the rules over a few generations. The resulting string is a set of drawing instructions. Weed-1 looks like this:

This means start with F, everywhere you see an F, replace it with the string on the left hand side of the of equals mark. Apply that rule on the output a few times. These strings get big fast. Here's the resulting instructions for the weed show above (just three levels deep):

The drawing instructions are interpreted as follows:

There are some other nuances (e.g. a number before a rotation means that you multiply that rotation by the number) but this is the general idea. There is plenty written about them online.

This part was mostly straight forward. Start with the axiom, loop over the rules, use a find an replace until you reach the desired depth.

As a bit of pre-rendering, I replace the | command with an integer at the current depth. This is the easiest way I could think to handle these.

At first I thought I would just loop through the instructions:

It seemed the canvas's 2D drawing api had a method that matched each instruction, and that made sense. The canvas api and turtle graphics have a shared history.

But as I started I ran into a few shortcomings and suddenly this very simple solution fell apart.

If you're performing the actions immediately as you interpret the commands you will run into problems with rotation. Assume you have three commands, move forward, rotate to the left and then move forward again.

You find that the lines won't connect, because rotate() rotates the entire coordinate system. In order to draw the line rotated you need to stop when you come to the rotate command, find the next line's center, translate to that point, then rotate and then translate back. Because the look ahead might not just be single step it could be tricky to figure out how far ahead to look.

The simple 1:1 application of commands to canvas api calls suddenly starts to show its rough edges.

It also would have been nice to simple use the scale() call to shrink or expand my entire drawing to fill the space of the canvas. But doing this meant that my line width would scale as well. If I wanted to use scale() I would need to dynamically adjust this to compensate.

My fall back was to process the commands into a series of 2D points, using simple 2D vector operations (rotate, add) to help rotate and navigate around the surface. I ended up liking this much better—the entire pipeline is basically a set of transformations on simple data structures (strings, lists of vectors, e.g.) and that gives me extensibility and flexibility.

The paths step is generated by starting at (0,0) and adding a vector (0,1) when we need to move forward. A rotation is maintained and the (0,1) vector is rotated before the addition happens. The result is an array of arrays. For instance the commands FF would result in:

Once all the individual paths are generated, its easy to loop over them and divide them so they exist in a space between 0 and 1.

So the above would become:

From there, it's easy to scale these paths to any dimensions by looping through the vectors and calling a scale() method on them. All the hard work is down by the vector datatype (the type of point below).

With the data structure being a simple list of points, rendering is easy. To render in SVG, just loop through and create a long path string:

To render in canvas just use the moveTo and lineTo calls: